As per usual, I made the trek to Cait’s school to pick her up from after-school activities. She threw her too-heavy backpack on the back seat and slid into the front, pulling the car door closed after her. Before I could even ask how her day went, she launched into conversation.

“Mom,” she said, “You won’t believe the most wonderful thing happened today.”

Not usually the opening line when Cait hops into the car these days, I was curious to hear more. “What was it?” I asked.

Cait was so animated that I was expecting some personal great thing had happened to her. As the story unfolded, I’d discover that she was merely a witness.

“You know how I told you last night that because Sarah (Cait’s close friend) was a few minutes late to rehearsal, she missed out on the chocolate chip cookies the play directorÂ  made for everyone yesterday?” 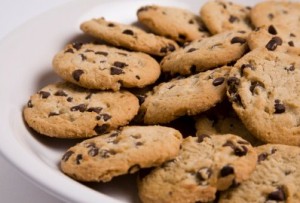 “Well, he went home and baked a whole plateful to give to her today! Can you believe it?” Cait said. “How amazing is that?!”

I’d have to agree it was pretty darn amazing.Â  For Sarah, because she is so shy and has tried so hard the past three years to get a role in the school play and finally did get a lead role. For the director (who is also a terrific teacher) to go out of his way to be so thoughtful and kind. And for Cait to witness it and to realize she was seeing something pretty special.

With all the bad news pumped out over the airwaves that’s too easily allowed to shape and define our world, it’s nice to be reminded that there are still plenty of these bases-are-loaded, hit-it-out-of-the-ballpark, Life-is-astonishingly-GOOD moments to be had.