One of the many responsibilities I feel as a mother is to teach my daughter how to develop a social conscience. In a modern world where it’s so easy to get lost in one’s own personal pains and pleasures, I want Caitlin to at least be conscious that there’s a whole big world out there that, in fact, doesn’t revolve around her.

I look at the task as akin to Galileo trying to convince the Catholic Church that the sun didn’t revolve around the earth, but rather it was the other way around. In other words, I realize that it ain’t gonna be easy. As our culture claws at Cait to fit in and look the right way, act the right way, and like the right things, I have to continue to find ways to broaden her understanding of what makes people tick and why, how the world works and why, along with how she can make a difference and why that matters. I want to help her see how settling for conformity can stifle her creativity, independence, and courage.

One of the ways I can begin to get her to think this way is to suggest to her: “Ask not what the world can do for you. Ask what you can do for the world.” I say world rather than country because as I look at my daughter’s future, the world will continue to shrink, as global interdependency continues to grow, and nationalism will likely become an outdated concept. 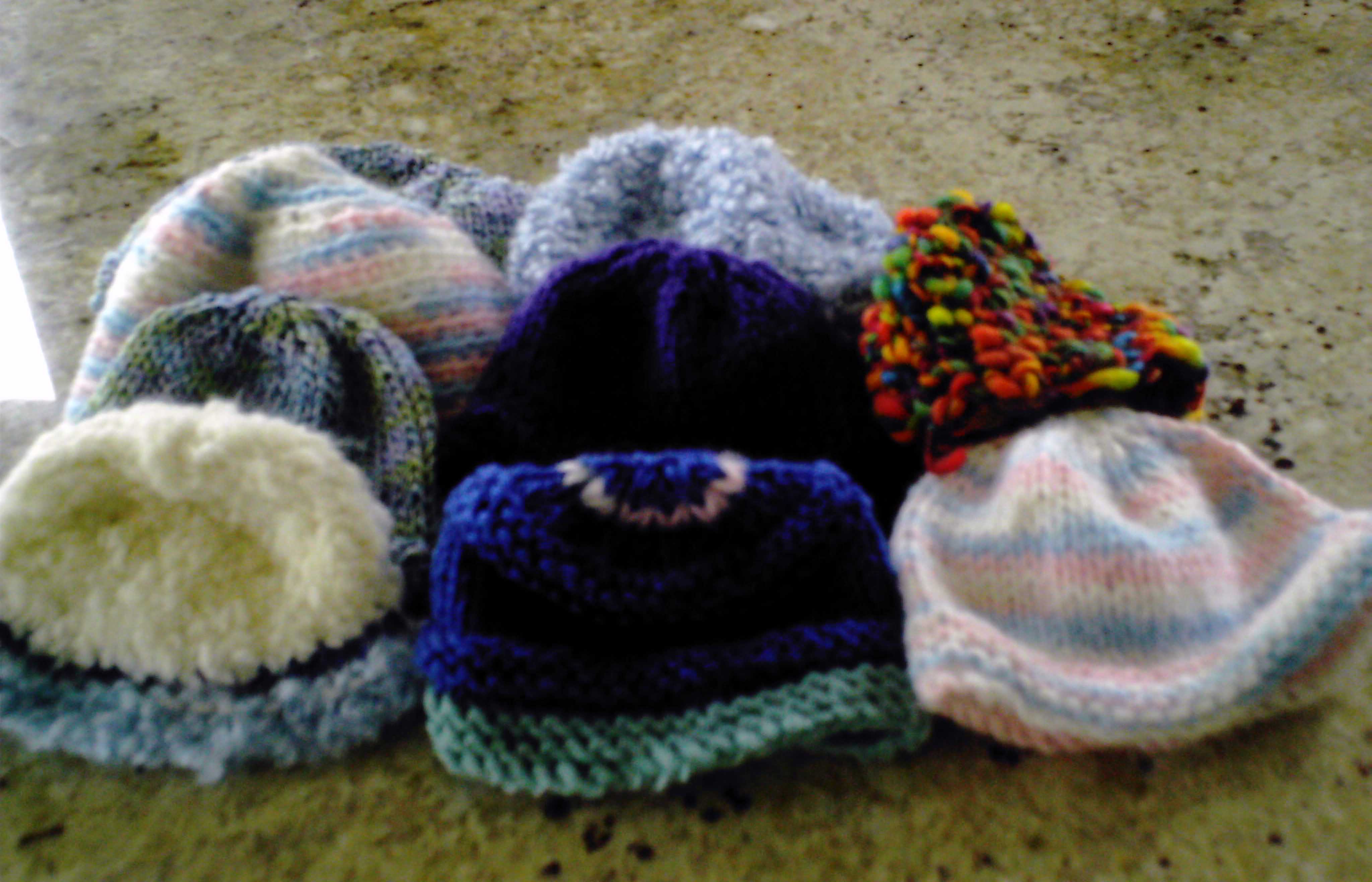 One of the projects Cait and I are working on together to help her with this idea of social conscience is to knit caps for newborns, which will then be sent to poor countries. The program is called Caps to the Capital, sponsored by Save the Children. The photo is of some of the caps we’ve finished already. We’ll be knitting through December, and then mail them in time to arrive by the deadline of January 2, 2007.

A like-minded friend (Hi Dotty!) put me on to the project, which came about from news reports that highlighted that many of the 2 million babies who die each year in the first 24 hours of life in developing countries could be saved by simple, cost-effective measures. Like putting a cap on a newborn baby’s head. Obviously, there’s a need for antibiotics, etc., but I was looking for a project that Cait could personally relate to. To keep it fun and show her that having a conscience doesn’t have to be dull, we sometimes meet with a group of mom friends and kid friends, and we all gab while we knit.

What I most love about sharing this experience with Cait is hearing her say every time she finishes a cap and tosses it onto our growing pile, “Another life saved.”

What’s also powerful is that Cait, on her own, has come to me and said that she’s realized from this experience that helping doesn’t have to hurt. What she was trying to express, I believe, is the concept of enlightened selfishness. Andrew’s father, who did hospice work before he died, expressed this idea elegantly: “I do the hospice work for myself. I’m clear about that. People want to make me out to be a saint. I’m not.This should all be natural, but we’ve all become so self-protective that we’ve forgotten how self-rewarding helping work can be.”

The ones who succeed at developing a healthy social conscience, it seems to me, are the ones who realize the reason they’re doing what they’re doing is because it benefits them as much as it does whomever they’re trying to help. The benefit, at the very least, is that we can feel good about ourselves, and at the very most, is that we get to realize that we’re all part of a larger whole.

I believe Cait’s well on her way to understanding this.

6 thoughts on “Building a Social Conscience”