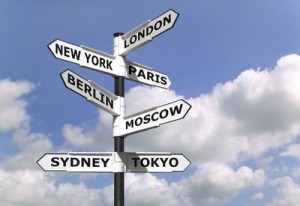 Cait is going on a foreign exchange program soon. We’re in the countdown to liftoff, with its attendant flurry of activity. That means that along with going over packing checklists, we’re running through cultural and language checklists as well.

Having lived in other countries, I’m keenly aware of the fact that because all humans essentially look the same–two eyes, two ears, a mouth, etc–we tend to make assumptions that people everywhere else are pretty much like us. And therefore we can mostly accurately interpret all other people’s actions and behavior through our own cultural lens. Sometimes that can cause some funny and not so funny misunderstandings.

I can say from firsthand experience that, while some would argue that the world has gone flat andÂ homogeneity is the new norm, there are still plenty of differences that set each culture apart. Interestingly, one of the experiences that tipped me off to this fact happened before I even had a chance to set foot outside the US.

In having had the opportunity to study three languages from two language families, I found that learning about the differences in sentence structure and grammatical gender, for instance, gave me an interesting glimpse into different thought structures which, I came to believe, reflected certain cultural views and behaviors.

After an afternoon of intense language review and cultural differences of which Cait needed to be mindful, all three dogs came over to let us know it was time for their run out in the big field. Looking at their clear behavior and communication, her response was, “Mom, dogs speak “dog” the same way pretty much everywhere in the world. Dogs act “dog” the same way everywhere in the world. Why do humans have to complicate everything so much? I think the world would be a better place if we were more like them.”

I think she might be on to something there…

If you’ve had the chance to travel or live elsewhere, what have been some of the cultural differences you’ve noticed?

8 thoughts on “Dogs Have a Universal Language. Why Don’t Humans?”