Cait is of the age where it’s time for me to teach her how to drive. For as exhilarating as she finds her lessons, that’s how nerve-racking I find them. So when we get in the car for another lesson, I take comfort in the way she falls back into our usual “long drives” routine.

She starts with her customary opening line, “So what should we talk about, Mom?”

As Cait has a tendency to drive a little too close to the shoulder of the road, I say, “We should talk about how you should stop listing to the right and stay in the center of your lane!”

Cait makes the correction and says, “So Mom, me and my friends were talking about what would happen if someone really developed a time machine and went back in time.”

“What do you think would happen?” I ask, not unhappy for a diversion to help keep my heart out of my throat and in my chest.

“I think it would be a disaster,” Cait says. “It would change history and mess everything up.”

On the lookout for a road less traveled, I tell her to take a right up ahead.

Cait slows to a jerky stop, puts on her blinker and then turns. “What do you think?”

“I wouldn’t be too terribly concerned about it,” I say.

“Why not?” Cait says, looking over at me.

“First, please keep your eyes on the road. Second, there are two reasons actually. Implicate order and chaos math,” I say.

“And… that means what, exactly?” Cait asks.

We’d been driving around on back roads long enough for Cait to start morphing into some semblance of a capable driver–enough so that I’m able to loosen my death grip on the door handle.

Warming up to the topic, I start explaining, “What science is discovering, and what many mystics have known for centuries, is that there’s an underlying equation that orders everything, whether we know all the pieces of what that equation are or not.

“In the enfolded or implicate order, space and time aren’t the key factors that decide whether something acts dependently or independently–like your time machine going backward or forward in time. Which means that a very different kind of connection is possible between time and space, and stuff made out of particles–like us.

“Bohm, the guy who developed this theory, thinks that the main thing about understanding order–especially the space/time/particle order–is that the undivided whole, and the implicate order contained within that whole carries way more deterministic weight than the parts of the whole, such as particles, quantum states, and stuff like that.

“In fact, in Bohm’s mind, the whole encompasses everything, including form, abstract ideas, and processes. What this means is that parts could be physical things, such as atoms or subatomic particles, but they could also be abstract things, like quantum states. But whether they’re physical or abstract doesn’t matter because the parts have to be considered in terms of the whole, and as such, they act as relatively autonomous and independent “sub-totalities”. Which means that nothing can be entirely separate or autonomous.”

Cait asks, “Is that what you think, Mom?”

“Yeah, as best as I can wrap my brain around it. Like Bohm, I believe that life and consciousness are enfolded deep within this order and are present in all matter, so that despite appearances nothing really happens in a random way, but rather creatively as integrated wholes from implicate levels of reality.”

Checking to see if Cait’s still with me, and she is, I continue, “And then if we wanted to make it even more interesting, we could toss into the mix a few deterministic systems of a little Chaos math, and we could say that if –and I know this is a big “if” but humor me–if the initial state of a system were known exactly, then the future state of such a system could be predicted.

“In other words, if someone went back in a time machine it would be because it had already existed in the implicate order. And therefore it was supposed to have happened. And therefore whatever “changes” came from that person going back in time were already accounted for and therefore wouldn’t really be changes at all.  In short, it could only happen if it had already happened.”

“You know, Mom, I’m probably the only 16-year-old on the planet who could understand what you just said.”

“Yep, now if you could just find me a time-machine that would take us back to when you were five years old please…”

“Okay, forget the time-machine. Just turn this puppy home so I can get out and kiss the ground. I’ve had enough excitement for today.” 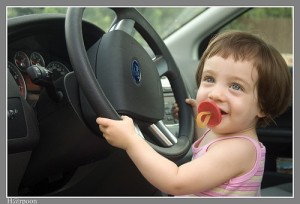 Once home, I did sneak off and do the next best thing to a time-machine. I spent the afternoon looking through family photos.

Wistfully, all I can say to all you mamas out there–hug your babies tight. They do grow up so fast…  Before you know it, you too will be slamming your foot on the invisible brake as you sit on the passenger side, while your child lurches on down the road to independence and adulthood.