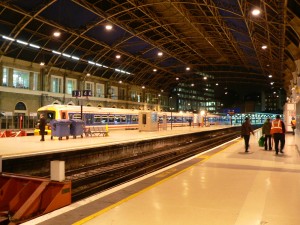 Cait, knowing we had a long drive ahead, led with her standard question as soon as we pulled out of the driveway, “So, Mom, what should we talk about?”

Feeling more than a little frazzled and grumpy from a ridiculously hectic morning, I said, “Give me a minute.”

I concentrated on unfurrowing my brow, loosening my grip on the steering wheel, and taking a couple of deep breaths.

“Okay,” I said, looking over at Cait. “Now, what was it you wanted to talk about?”

“I want to know how you’re able to do that,” Cait said.

“Change your mood that fast? I mean, just a minute ago, you were a little scary. Now you’re all smiling and relaxed. How did you do that?” Cait said.

“Ah-so Grasshopper…,” I laughed. “You ready for a story?”

Cait rolled her eyes. “I guess I asked for it.” She settled back in her seat and got comfortable.

“Long, long ago, and far, far away,” I began, “there were two young women living in England, who were very different from each other. One was sure that everything in life would work out the way she expected because that had been her experience. The other was sure everything in life would be a struggle because that had been her experience.”

Cait asked, “Were they friends?”

“They learned to like each other over time, but they weren’t what you’d call natural friends. Their worlds were too different.”

“What made their worlds so different?”

“One came from a very wealthy family where her every need and want was met. She hadn’t known a day of hardship and had encountered very few disappointments. The other was not from a wealthy family, and she was expected to pitch in and work from an early age. When her father became ill, she left school to help run his business until he recovered. She was accustomed to life’s left turns and disappointments.”

“They do seem like an odd pair…” Cait said. “So what were the lessons?”

“I’m getting to that,” I said. “The serious girl was trying to make up for the lost semester and was taking a heavy course load that kept her shuttling between two cities. This required a long train ride several times a week. She’d get up at 4:30 in the morning to walk to the station, and she wouldn’t get home until after 9:00 at night. She’d spend a few more hours on homework, and then get up and do it all over again the next day.”

I continued, “One day, the rich girl decided that it would be fun to meet the serious girl in London, have a night out on the town, and hop the last train home. The serious girl was in need of having some fun. So they met, and indeed they had a lot of fun. And…” I looked at Cait, “they lost track of time.”

“Yep,” I said. “By the time the serious girl looked at her watch, she realized there was no way they’d make the last train. So she did what she was good at doing. She went into problem-solving mode, switched to Plan B, and decided they could sleep on a park bench for the night. Because, even if they’d pooled their money, there wouldn’t have been enough left to get a room.”

“That’s what I would have done,” Cait said.

“Yeah?” I said. “You thinking you’re more like the serious girl?”

“I don’t know yet,” Cait answered. “You haven’t told me what the rich girl is going to do yet.”

“Here’s what the rich girl does,” I said, and then I took a long swig from my water bottle.

“Mommmm,” Cait said, grabbing for the bottle. “The story!”

“Right.” I put the water bottle down. “So the rich girl listens to the serious girl’s assessment of the situation and says, ‘You can sleep on a park bench if you want, but I’m running for the train!’ and off she goes at a gallop!”

Cait’s eyebrows raised and her mouth dropped. “And she just left the serious girl behind?! All alone?!”

“She did. For about thirty seconds. And then she raced back, grabbed her hand and said, ‘Come on, we’re going to make that train!’ And she pulled the serious girl behind her.” I looked over at Cait, “The serious girl had no choice but to run, but she was thinking the whole time that the train had already left by then; she knew the train schedule by heart. There was just no way…”

“And they got to Victoria Station in time to see on the departure board that the train had been delayed. They hurriedly pushed through the turn styles and ran out to the platform just as the train started slowly pulling out of the station. The rich girl yelled to the porter and he held the door open for them. After they’d hopped onto the train, the serious girl couldn’t stop laughing.”

“Because she’d just experienced a life-changing moment and she knew it. In that instant, her brain got rewired and she was giddy with that awareness.”

“Just like that,” I said. “From that moment on, she knew she would always run for the train — metaphorically speaking. And she has ever since.”

“That’s actually pretty cool, Mom.” Cait said, “so, what was the lesson the serious girl taught the rich girl?”

I patted Cait’s knee. “That’s another story for another day,” I said.

Cait thought for a moment. “So, Mom, were you the rich girl?”

“I’ve become the rich girl in spirit,” I smiled. “But back then, the rich girl was my college roommate. I have to give her credit for some of my more outrageous accomplishments. Because, whenever I think something isn’t possible or think that I can’t, I remember that night, and decide that I can.”

“And that’s how you changed your mood earlier? You just decided to be happy?”

“That’s a small first step, my love, but one of the most important,” I said. “Once you decide to be happy, once you decide that the world is here to support you rather than to fight against you, then anything is possible.”

I looked over at Cait, “So, you know where I’m going with this…”

She laughed. “Yes, mother, I promise from this day forward to always run for the train.”

“And I promise,” I said, “that if you do, there will always be a train waiting for you.”

13 thoughts on “Running for the Train”