Living with Multiple Dogs–Is There a Right Number? Benefits & Drawbacks

If having one dog is good, is having two better, and ten even better?

I have quite a few friends who have several dogs. One brave (insane) friend has eleven! If you were to ask them, they’d answer with a hearty, “Yes!”

And there’s actually a pretty simple test to help you determine if you might fare well in that camp. Take a good look at the following picture. Does it make you smile or gulp hard? Okay, you’ve got your answer. 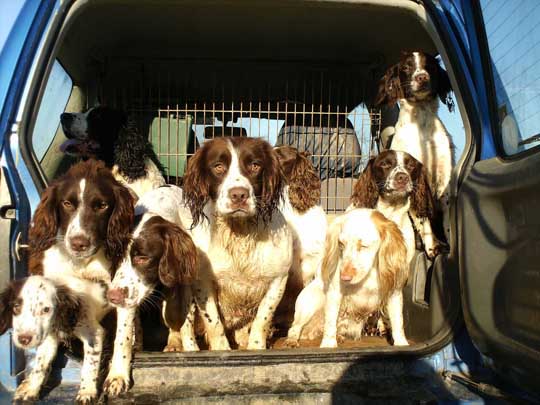 So is there a magic number?

As one of my favorite dog trainers, Suzanne Clothier, says, “It depends…”

…Mainly on how much time, knowledge and resources you have.

I’ll spend the rest of the post breaking all that down. But let me cut to the chase here so if you don’t want to read a lengthy post you can skip out now.

What do I think is the magic number for the average person? Two.

Why not three or more? Because two’s company (yes, it’s technically a pack, but think “pack-lite”) whereas three or more is definitely a pack. And a pack is a whole other kettle of fish that most folks just aren’t prepared or equipped to deal with.

So why do I now have three? Technically, I only have two. Or at least that’s what I keep trying to tell myself. Number 3–the little squirt–is my daughter’s.  (This post explains everything.)

Why I believe two is the right number for many people:

You get the benefit of having two dogs keep each other company without the tremendous work and expense of multiples when it comes to training, feeding, exercising, grooming, vet bills, etc. The multiple list goes on and on.

Passing the time in the company of another dog can make long hours of human absence more interesting and certainly more enjoyable. Two dogs can play and investigate their environment together.

Having each other lessens the level of boredom (a real problem for city dogs and dogs left alone most of the day), thereby lessening the chances that they’ll look for a way to amuse themselves at your home’s expense.

Two dogs can provide exercise outlets for each other (especially when they are of similar size and energy levels).

You don’t have to bear the full responsibility of having to entertain your dog.  And watching two dogs who play well together is a joy to behold. Since you’ll be watching how the dog-to-dog relationships develop over time, your ability to read your dogs’ body language will be enhanced.

Traveling with two dogs is still relatively easy. Just throw them in the car and go. No minivan or small bus required.

Why I  believe three or more dogs is too many for most (but not all) people:

When you get to three or more dogs, you can get into serious pack management issues. In my mind, unless dogs are your whole life, you’re extremely knowledgeable, or you’re a trainer, one or two dogs is a great number to have.

Plan on separating your dogs for feeding, even if they’re compatible. Squabbles break out easily with multiple dogs when food, or other perceived limited resources come into play. It’s much safer — and easier — to separate dogs for feeding before there’s a fight, rather than waiting to see if one will occur.