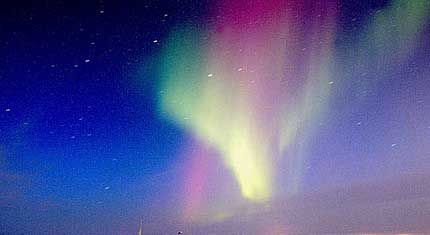 The first time I saw them, I was camping out in Nova Scotia on an isolated sliver of a peninsula that jutted out into the choppy Atlantic Ocean. As I’d done since I was a kid, I threw my sleeping bag on the ground so I could have a clear view of the night sky. It was the new moon, so I was anticipating some magnificent stargazing.

What I wasn’t anticipating was what happened next. All of a sudden and out of nowhere, I saw a ribbon of colored light dance across from one end of the sky to the other. It was accompanied by a singular swishing sound.

Not only had I never seen the Aurora Borealis before, I’d never even heard about the phenomena. It made the hair on the back of my neck and arms stand straight up. The show went on for hours and I was spell-bound. It was an oddly spiritual experience. And I’ve been lucky enough to see several displays since.

So when I opened the email from a friend in northern Canada, and saw this photo and her description of her experience, I had to smile. Getting to see the Aurora Borealis sure is a spectacular reminder on a very elemental level of the wonder of the universe.

If you’re ever offered the chance to go somewhere where you can see them, it’s well worth the effort.

And if you’ve never heard of them before and don’t know what they are, the aurora borealis, or northern lights, are beautiful, intricate, and rapidly changing colored lights that shoot across the night sky. They typically only occur in the extreme northern and southern latitudes when solar wind particles collide with air molecules in the upper earth’s atmosphere.

Displays can vary in intensity from a glowing curtain of greenish-yellow lights, to a spectacular, multi-colored fusion stretching across the sky.

If you’re fortunate enough to find yourself in the right place with the right conditions — far enough north (or south) on a clear cloudless night, close to the new moon, and away from town lights –maybe you, too, will be gifted with the light show of a lifetime.

Karen has been a student of the spiritual from her early teens. Her Inner Teacher showed up after an awakening event in her youth. They have been in communication ever since. She is also an author, consultant, and speaker.

She has been a sought-after spiritual teacher and personal transformation coach for more than twenty-five years. Her seminars and private sessions have impacted thousands of people from around the world.