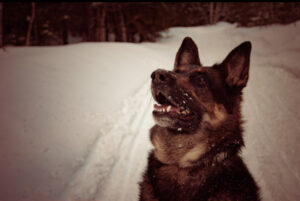 Excerpted from The New York Times: Two men lay unconscious on a frigid Vermont night until Tinsley, a 1-year-old Shiloh shepherd, led the authorities back to the site of the wreck.

Tinsley, made sure officers following her stayed close behind as she ran back to where a truck had crashed into the woods.

At first, the officers were simply trying to catch Tinsley to get her out of traffic on Interstate 89 after a driver reported a dog running loose. But she kept running north, slowing occasionally to keep the officers close behind, Lt. Dan Baldassarre of the New Hampshire State Police said in a statement. She eventually led them to a bridge over the wreck.

Despite stories like Tinsley’s, the science is not yet settled on whether dogs can intentionally seek out other humans to help their distressed owners.

“Well-supported evidence that dogs intentionally go seek help for their owners just doesn’t exist yet,” said Joshua Van Bourg, a Ph.D. candidate at Arizona State University who studies animal cognition behaviors. “That’s not to say it doesn’t happen, and maybe this dog is an example of it.”

Dogs may do things that result in humans being rescued, Mr. Van Bourg said, “but the jury is out on how much of that is done intentionally for the purpose of rescuing people.”

Even so, this behavior can be remarkable, he said. Tinsley must have loved her owner very much “to be a mile away, free as can be — you know how some dogs get when they’re off-leash — and still want to come back.”