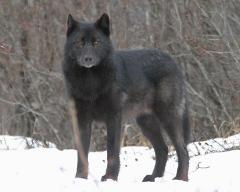 I know I’m preaching to the choir here, but this kind of thing drives me nuts. Recently, there was an article in the Anchorage Daily News about a wolf named Romeo who had become a regular visitor to the lake in town. As often happens when people have a love for wild animals, they want to get close. They want to have their own personal experience. But the ways in which people do this can spell trouble for themselves and for the wild animal. Usually without a happy ending for the animal.

In Romeo’s case, because he had become somewhat of a regular and people had become acclimated to seeing him without incident, some of the town folk started letting their dogs run and play off leash with him. I think you know where this story is going…

With the help of the likes of Disney, and zoos, and now even some national parks where wild animals have learned to come right up to the car window to be hand fed, some people seem to have lost rather than gained a deep understanding and connection to wildlife. They seem to have lost the concern for what happens when wild animals become habituated. Some of these people seem to have developed a kind of entitlement thinking — everything exists for me and my entertainment — caring only for the thrill of the moment, and little for the price this entitlement exacts.

Following is an email exchange on this subject with two friends who routinely encounter wildlife:

Watching people around wildlife I see many people struggle with how cool it is that they, their family, their dogs are interacting directly with a wild creature. I have struggled with this myself off and on. But for me it comes down to asking myself whether my interaction today will harm this animal tomorrow. For instance, when I saw the moose on my walk today (this friend lives in Alaska), I found it tempting to try to get closer to see what she was up to. The urge is sometimes very strong, but I reluctantly moved on. We’re in the last part of winter when the grazing is nutritionally poor and I didn’t wish to tax the animal and make her waste her precious reserves.

And when I see a moose from the window I’m tempted to offer an apple, because how cool is it to hand feed a wild animal? How cool would it be to habituate them to coming into my yard and staying awhile so I might enjoy watching them a little longer from closer than normal?

I think this for thirty seconds until I remember the times I can’t get out of the driveway as a moose is laying in the middle of it. Or I go to tend my garden and am charged by the moose laying next to the house that I didn’t see. I can’t take the dogs out to go potty as a cow and calf are at separate ends of the yard and a wolf or bear enters the yard looking for that spring calf. These situations reinforce my resolve to never feed wildlife. These are the situations people may be encouraging without realizing it.

A Canadian friend shared this perspective:

I think there is a radical difference between the relationship that you build with an animal due to your efforts and their acceptance and that which the average person exploits by hand feeding animals who are hungry.

I worked for many years as an outdoor educator and I remember one young boy who had stolen a gosling from a nest. He and his mother wanted my advice on rearing it. They were angry when informed that they were breaking the law and that they had likely ensured that this bird would never be a part of a flock of wild geese, bridging some magic between them and the other birds. They had not introduced this bird to water at two weeks of age because they were afraid it would drown! They wanted to raise a goose and they were determined to do so, no matter what the consequences were to the goose.

Rather than go on with these kinds of examples of selfish, unconscious people, let me just say that where I’ve come to after many years of working with people and wildlife is that it’s one thing when a chickadee chooses to come and sit less than a foot away from you while you make lunch on the trail and a different thing when you interact with the bear that gets fed chocolate bars on the side of the road.

Your moose observed you (addressing the above friend) as often as you observed her and made a choice. The choice was to determine if you were safe or dangerous, if you were friendly or unsafe to her. If early in your association with her she had charged you, you likely wouldn’t have continued to follow her. If you had spooked her, she would not have allowed you to follow.

There is a special relationship between beings who cross paths and both choose to make contact. There is a difference between relationship and exploitation. I fear that Romeo is being exploited, although he may have initiated the contact.

As a nature and animal lover with plenty of wild animals where I live, I also understand the awe and urge to want to get close to them. But I don’t. I stop and watch from a distance, but I don’t try to force a close encounter. And I never feed wildlife, because habituation almost always eventually means death for an animal. The life you save may be your own cat’s or dog’s, not to mention most assuredly the wild animal. So, please, if you don’t already, treat all wild animals with caution and respect by keeping your distance, no matter how friendly they appear, and no matter how amazing it would be to get up close and personal.

We hold the fate of these wild animals’ lives in our hands. Let’s hold them carefully so they’ll be around so that our grandchildren and their grandchildren may come to know and enjoy them as well.

7 thoughts on “How Best to Show Love for Wild Animals? Keep Your Distance.”