What I Really Think About Having 2 Dogs vs 3 Dogs 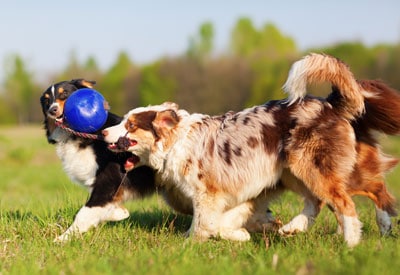 Q: From the Mailbag: Natasha asks, I currently have two male dogs (a Labrador 5 yrs and a Yorkshire Terrier 2 yrs) and they both get along great. I’ve always wanted a Rottweiler. Do you think it would be a bad idea getting a 3rd dog? What sex would you say would be better? Thanks.

A: Natasha, having had one dog, two dogs, three dogs, and four dogs at various times, my favorite number is two. Adding a third dog is a big jump up in time, energy, and expense. I don’t know enough about your circumstances to really advise you (yard space, dog experience, time for training and exercising, etc.) other than to say that if you have two happy dogs who get along well, I’d be inclined to encourage you to enjoy what you have and not add a third–the pack energy with 3 dogs is way more intense than with just 2 dogs. If you feel compelled to get a third, given that you’ve got two males, I would go for a female.

The above was what I recently wrote in response to a reader asking a question about adding a 3rd dog. She came by way of my post:  Is Having Three Dogs Better Than Two or One?  In that post, I show a series of pics with my three dogs running and playing and generally having way too much fun. Clearly, they’re enjoying their game of tag.

But in that post, I didn’t elaborate on the not-so-small-detail that it took months of serious training and management to get them to a point where they could all do so well together.

The truth of the matter was that it took Kiera quite a while to warm up to Graidy when I first got him, but he eventually won her over and they established a stable pack. When we added Wink, Graidy’s place in the pack became destabilized, which caused him to develop some emotional issues (which have since been worked through). And with a destabilized pack, I had to watch both Kiera and Graidy for aggression toward Wink. I did not leave them alone for the three months it took for a new pack order to become firmly established. There were many moments where if I had not been there to lead and intercede as needed, it could have turned ugly.

In the midst of this, we had house training and obedience training to do with Wink. And Graidy started marking in the house to reestablish his sense of territory, so he needed remedial training. In other words, as the saying goes– It weren’t no picnic!

Granted, I have a couple of pretty intense dogs. But too many people assume that you can just throw any number of dogs together of various breeds and they’ll do just fine. Some people get lucky, and that’s their experience. But, unfortunately, just as many people find that they’ve opened Pandora’s Box and they’re not prepared for what gets unleashed.

Here’s what I really think about adding a 3rd dog
(or more) to your 2-dog pack:

If you have a happy family, keep it that way. Two is a manageable number and enough for them to keep each other company when you’re not around. Having more dogs than that is an invitation for trouble. If any one of your dogs has any aggression tendencies, not only will those amplify significantly, the other dogs will also likely pick up those same aggressive tendencies even if they didn’t have them before.

Don’t underestimate the power and influence of pack behavior on each individual dog. As well, the wear and tear on your house, your wallet, and your heart become exponential with each dog you add.

So much so, that I’m going to repeat myself: Unless you are advanced in your ability to train and understand dogs, and you’re independently wealthy (only half-joking)– DO NOT ADD A THIRD DOG. Okay, there– I had to come clean.