Dessert is in the Eye of the Beholder 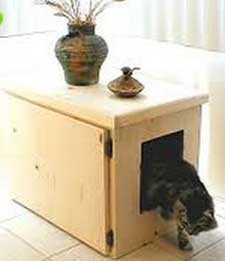 It’s been an exciting couple of days. I go away for just ONE day and come back to find that not only has Wink eaten a corner of a rag rug to shreds, but then he helped himself to the covered kitty litter box for dessert!

How did I find this out? When he started throwing up the evidence.

Not aware that he’d been binge-eating at this bazaar banquet, I quickly got brought up to speed with one look at his technicolor throw-up.

Then the trick was to get it picked up faster than he could scarf it back down. You don’t want to know how I beat him…

After I was confident that he’d thrown up all the strips of fabric and cat clumps he’d eaten, and he continued to eat, pee, and poop normally through all of it, I decided an emergency vet visit would not be required. Oh, I didn’t mention that this was, of course, on a Sunday? Do emergencies ever happen during normal vet hours? Is the sky blue? Okay, I’ll stop now.

One of the ways I occupied myself during this little episode, with Wink tethered to me on a leash so I wouldn’t miss anything that “came up”,  was to research to see if eating kitty litter posed any serious health issues. I already knew that eating poop didn’t, as Graidy has been a poop eater since Day One and he couldn’t be a heartier healthier dog. That, and the vet told me not to worry about it. Other than being gross, it’s extremely common.

All I had to do was type into Search, “my dog ate cat litter” and I hit the jackpot.

Here’s what happens if a dog eats kitty litter–pretty much nothing, unless half the litter box is consumed. I found the following on the ASPCA website.

Many scoopable cat litters contain bentonite clay and/or silica. The bentonite component of kitty litter, sodium bentonite is a naturally occurring clay mineral that is considered to be biologically inert when ingested. Silica is also a physically and chemically inert substance, and is a major component found in ordinary sand. Silica is also used as a moisture-absorbing agent in the little packets found in shoe boxes, medications and some foods. In our experience, pets ingesting small amounts of silica gel may develop only mild gastrointestinal upset, if any signs develop at all.

Cats may ingest small amounts of litter when grooming themselves after using the litter box, and these amounts pass through the digestive tract easily without problems. However, if an animal consumes a very large amount of litter (as can happen when a dog “cleans out” the litter box), gastrointestinal upset, constipation or, in rare cases, intestinal obstruction could potentially occur. In addition, consuming fecal material may cause bacterial-related gastrointestinal problems. It is a good idea to discourage your dogs from helping themselves to the litter box by placing it in an area that is out of their reach, but still accessible to your cat. 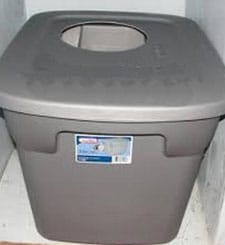