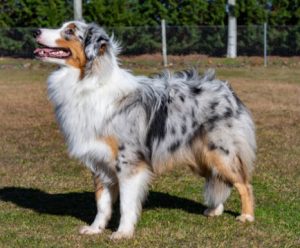 I cannot tell a lie. I’m wavering. I’d initially wanted to wait at least a year before bringing another dog into my life. I’m blaming it all on my daughter, Cait.

She’s been having me look at Aussies in Rescue and Shelters for her. She’s thinking she wants a Mini Aussie with a tail. Specifically a Mini Aussie Blue Merle. This is the girl she has her heart set on. She’s also thinking smaller is better for apartment living.

Looking at all these Australian Shepherds in various sizes (there are even Toy Aussies now) is torture. It’s taking all my resolve not to find myself one today! 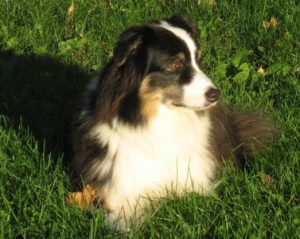 In my opinion, Kiera was the perfect dog in every way. Stunning. Not over-the-top energy and yet indefatigably athletic. She could go on long runs with Andrew and still have plenty of oomph left over. And, of course, it goes without saying, brilliant.

So all of this has me researching what the differences are between Mini Aussies (also called American Aussies) and standard Aussies besides just size and weight. Come to find out, there are what I would consider significant differences. The Mini Aussie is way more than just a smaller version of a Standard Aussie.

First, Mini Aussies are now their own AKC breed.

Despite the decision of the AKC to call the breed “Miniature American Shepherd,” they are the same dog as the “Miniature Australian Shepherd” and most people use the names interchangeably.

Standard Australian Shepherds’ height in males ranges between 20 to 23 inches in height. Females range from 18 to 21 inches. The average weight is 50 to 65 pounds for males and 40 to 55 pounds for females.

Miniature Australian Shepherd males are between 14 to 18 inches tall and females are from 13 to 17 inches tall. The weight range is from 20 to 40 pounds.

A Standard Aussie’s lifespan is typically from 12-15 years. (Kiera made it to 13 and would have lived longer if she hadn’t developed vestibular disease.)

Mini Aussies come in at around 13 years life expectancy.

Depending on who you talk to, some think Mini Aussies are bigger barkers and more anxiety-prone. There are others who say the opposite–that they actually bark less than standard Aussies. And when they are herding, they seldom bark at all. And, in theory, since they’re smaller, they can do better in an apartment and a smaller backyard. Some think they are also more affectionate than standard Aussies. While that may sound wonderful, as velcro dogs to begin with–“even more affectionate” can cause problems if you have to leave your dog alone for hours at a time.

But both sizes, as herding dogs, are high energy, intelligent, and protective of their family. These are velcro dogs who don’t like to be separated from their persons. Either size can develop separation anxiety if you leave them alone for too long. They typically bond most strongly with one family member but are protective of all.

Because these are herding dogs, they need a tremendous amount of socialization to not become anxious and distrusting of strangers. This should be your number one priority.

Training is also a must. If you don’t train your Aussie they will train you. An untrained, unsocialized Aussie is an Aussie that winds up in Rescue because they just become too much for their family to handle.

Because they are strong-minded, high-energy dogs, they don’t make good dogs for first-time dog owners. Yes, they are gorgeous and smart, and funny. But they are a handful. Heed these words and take them seriously. Be a responsible dog person and don’t get a dog that you don’t have the time and experience for.

Be prepared for sticker shock. Prices seem to be all over the map for both, ranging from $1,500 on the low end to upwards of a heart-stopping $5,000 or more on the high end.

Because Cait isn’t in a position to spend that kind of money and she grew up with herding dogs, she’s comfortable going to the rescue well, knowing that she also has me to help her evaluate any dog she’d be considering. Even with that, she’s aware that it likely won’t be a walk in the park, that she’d be bringing home a dog that will need extra TLC and training. Wish us luck.