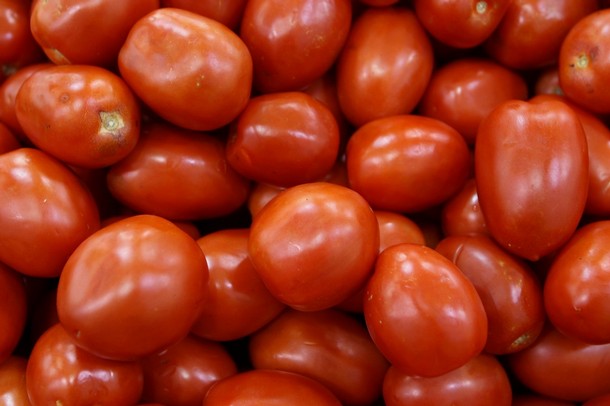 Having just picked a bushel of ripe tomatoes, there was only one thing to do. Get busy making spaghetti sauce.

I put Cait on garlic and herb chopping duty, while I prepared the tomatoes.

I love having Cait help, not just because the work gets done faster, but because Cait likes to talk while she works. That’s what makes the time fly.

In the midst of chattering about this and that, I was having Cait taste all the fresh ingredients for the sauce that we’d collected from the garden — basil, oregano, garlic, carrots (I use them to add sweetness instead of sugar) and two varieties of paste tomatoes. I explained that if she wanted to become a good cook, she had to first know what each ingredient tasted like individually before she could have an idea of what they might taste like combined.

That started a conversation on what our favorite tastes were from the gardens. Since I wasn’t allowed to pick everything, I narrowed mine down to peas, Hokkaido squash, and grapes. Not surprisingly, since she grew them, Cait’s were the sunflower seeds.

This led to her asking, “So, Mom. If you had to pick a plant that best described you, what would it be?”

“Huh?” I said, not particularly quick on the uptake.

Having conversations with Cait is often like being on an adventurous roller coaster ride where getting flung around the curves at high speeds is all part of the fun.

“Sarah and Emily (her two best friends), and I were just talking about this,” she said.

“You were, were you?” I said, thinking these girls sure come up with some unique conversations. “And what did you decide?”

“I said I thought Sarah was like a pea pod because it takes a little work to get her to open up, but when you do she’s very sweet.”

I was impressed because this is a very apt description of Sarah. “And what’d you come up with for Emily?” I asked.

“I thought Emily was like a sunflower because she’s tall and beautiful and has “sunny” hair.”

“Hmm, that’s an interesting choice for Emily,” I said. “What did the girls say for you?”

“Sarah thinks I’m like a strawberry because all my seeds — you know, my feelings– are on the outside for everyone to see, and because she thinks I’m sweet too.”

“And because good things come in small packages,” I added. (Cait is fairly petite compared to her classmates.)

“What plant do you think you’re like, Mom?” Cait asked.

Cait’s brain works much faster than mine on questions like this. She quickly offered, “I think you’re a pomegranate.”

“A pomegranate… Well, I have gotten rounder over the years.” I chuckled.

“Oh Mommm,” Cait rolled her eyes. “I think you’re like a pomegranate because you’re so multi-faceted, and because every nook and cranny is filled with so much goodness.”

“Yeah, I like your definition better. Let’s go with that.”

We laughed. And before we were done cooking, we’d assigned plants to everyone we knew.

And so, dear reader, what plant do you think fits you?