I think it was John Lennon who said, “Life is what happens to you while you’re busy making other plans.”

Well “life” sure has been happenin’ around here. Not least of which is that I’ve somehow been roped into adding a third dog to our crew.

It all started when Cait began making serious noise again about wanting her own little dog (emphasis on little). Having zero interest in adding a third dog, I told her to take it up with her father, because I was absolutely, positively certain that he would categorically say no. The matter would be over and I could continue on my merry way, having dodged a bullet.

And then that “life” thing stuck its finger in my ear.

Cait came running into my study with tears of joy. It seems my best bud, my love, my comrade-in-arms, my non-dog loving husband (whom I knew I could count on to say no) said yes! I went searching for him to see if he’d suffered from heat stroke.

He met me in the hall with a chagrined look and a hefty manila envelope in hand. It contained the letter Cait had written — an incredible 6-page, heart-felt, deeply thought-out letter expressing why she desperately wants and needs her own dog. I laughed and cried all the way through. It was a masterpiece.

Long story short, it was a no-brainer to see why Andrew said yes. It was the right thing to say — the only thing that could be said.

We’ve already found the puppy Cait will be bringing home in a few weeks (his photo is at the bottom of this post), but I thought this would be a great opportunity to walk you through the process of how you go about finding the perfect dog. There’s a lot to consider.

While my big concern is how I’ll be integrating this puppy into my pack, I don’t want to get ahead of myself so I’ll be tackling that in a later post. For now, I’d like to start at the beginning:

How do you determine what the Perfect Dog is for you?

Is it a rescue? A pure breed? A male? A female? A puppy? An older dog? A big dog? A little dog? As you can see, there are many questions that need to be asked before you can come up with the answer. And even more questions for you to consider here.

In our case, Cait knew she wanted a cuddly, small dog. And she wanted to get it as a puppy so she could start with a relatively clean slate. As well as being able to meet both parents to assess temperament and likely health issues of the puppy, the other big advantage is that she can raise it the right way from the very beginning. She’s witnessed the time and energy it’s taken me to get my rescue dogs on the right track, and that’s not the experience she’s looking for. This also meant that we’d be researching and looking for reputable breeders.

Because Kiera is a dominant female, and an older one at that, we knew we had to go with a male to be safe. (Mixing females together can be tricky business, and mixing females from the same litter is asking for trouble.) Knowing that we’d be looking for a male, I wanted to find a breed that wasn’t known for dominant traits. And because Graidy is a barker, I didn’t want to add another barky breed to our mix. And because Kiera and Graidy like to use our stairs as a NASCAR speedway, it would have to be one of the sturdier small breeds that could withstand being accidentally careened into.

Cait had done her own research on breed selection here, and had compiled a list of dogs she thought would make a good fit. Since I’m not familiar with small dog breeds, I immediately called up several of my trainer friends and asked what they thought of each of the breeds. Trainers are a great resource because they routinely work with various breeds — both puppies and older dogs alike, as well as easy and difficult dogs.

All were unanimous in their recommendation, and the list quickly got whittled down to one. So what did Cait get? 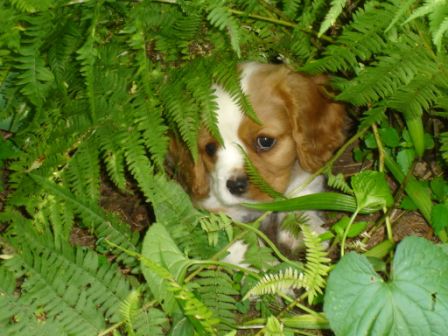 22 thoughts on “Life Not Crazy Enough for Ya? Add a Third Dog.”