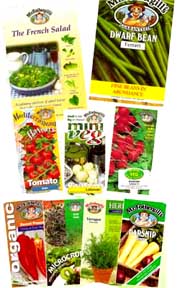 In my previous post, a reader had a question about seeds. My response was getting long, so I decided to share it here. I’m sure there are other would-be gardeners who also aren’t clear on the differences.

Jo at Ecology of a Woman asked about three types of seeds — Heirloom, Hybrid, and GMO (genetically modified organisms). I’ll add one more type — Open Pollinated (of which Heirloom is a subset).

Hybrid Seeds are produced by artificially cross-pollinating plants for the purpose of improving the characteristics of the new hybrid plant– ie. better yield, greater uniformity, improved color, disease resistance, and so on.

Pros: Hybrid seeds are widely used in both industrialized agriculture and home gardens so they’re easy to find. They do, in fact, produce a high yield of uniform crops.

Cons: Hybrid seeds can’t be saved because the seed from the first generation of hybrid plants does not reliably produce true reproductions of the original plant. So new seeds must be bought every year, which can get expensive. There is also a homogeny of taste, which can get boring if you enjoy diversity (heirlooms offer more varieties and therefore more flavors).

Heirloom Seeds are open-pollinated, meaning they grow “true to type,” producing plants like the parents from seed. These are seeds that were commonly grown in bygone days (pre-dating the 1950s), but then fell out of favor as gardeners of the 1950s rushed to try the “new and improved” hybrid seeds. Because hybrid seeds were selected for their productivity, and their ability to withstand mechanical picking and cross-country shipping, rather than for their flavor, heirloom gardening can be seen as a reaction against this trend.

Pros: Heirloom seeds offer a much greater selection of plants from which to choose. They also contribute to increasing the available gene pool for a particular plant for future generations. Some gardeners choose heirloom plants because of an interest in history and/or traditional organic gardening. Some gardeners prefer them for their unique tastes. Typically, heirlooms have adapted over time to whatever climate and soil they’re grown in, so they are often resistant to local pests, diseases, and extremes of weather. (I have certainly found this to be true.)

Cons: Some heirlooms may not be as hardy or disease-resistant as hybrids. This will be noted in the seed catalog. If you stay away from those plants, there aren’t any cons for the backyard gardener.

GMO Seeds have been genetically altered using recombinant DNA technology. Basically, what this means is that the DNA molecules from different sources are combined in vitro into one molecule to create a new gene. This DNA is then transferred into an organism, causing modified or novel traits in that organism that wouldn’t otherwise appear naturally.

Not surprisingly, the use of GMOs has sparked significant controversy. Some see this as dangerous meddling with biological processes that have naturally evolved over long periods of time. Others are concerned about the limitations of modern science to fully comprehend all of the potential negative ramifications of genetic manipulation.

Pros: Hmm, give me a few years and I’ll think of one…

Cons: Non-GMO crops can be cross-pollinated from genetically-altered plants from up to 13 miles away! This could be the beginning of a death-knell for any biodiversity. To be fair to the other side, GM proponents point out that outcrossing (as this process is known) happens with any new open-pollinated crop variety, newly introduced traits can potentially cross out into neighboring crop plants of the same species and, in some cases, to closely related wild relatives. That said, without going into all the implications here, I still find this stuff very scary.

Open Pollinated Seeds. Simply put, open pollination (by insect, bird, wind, or other natural means) allows the same cultivar to be grown from seed for many generations. The seeds of open-pollinated plants will produce new generations of those plants (which hybrid seeds can’t do). All heirloom seeds are open-pollinated.

Pros: Open pollination increases biodiversity and allows for ready saving of seeds. When you grow an open-pollinated variety and save it for seed, you will get offspring that are similar to the parents. By handpicking the plants from which you wish to save seeds, you’re on your way to creating fabulous tasting plants that are specifically adapted to your growing conditions, knowing they’ll produce for you from generation to generation.

Cons: Because pollination is uncontrolled and the pollen source is unknown, open pollination results in plants that may vary widely in genetic traits and characteristics. This is easily remedied by planting similar species at a distance from each other.

In a nutshell, hybrid seeds are great for the commercial and hobby gardeners who aren’t interested in saving seeds. Open-pollinated (including heirloom) seeds are preferred by the more serious gardener who wishes to become independent of other growers for his/her seeds and therefore food source. I wouldn’t touch GMOs with a ten-foot pole. But for the new gardener starting out, you really can’t go wrong with either hybrid or heirloom seeds. 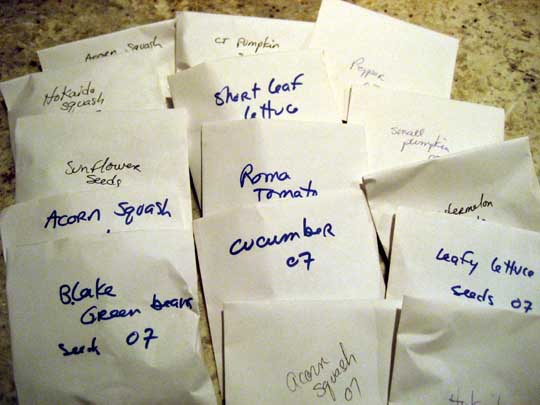 While I’m usually the first in my family to embrace new technology, when it comes to seeds and gardening, organic open-pollination for seed saving is my method of choice.

10 thoughts on “What’s the Difference Between Heirloom, Hybrid, and GMO Seeds?”