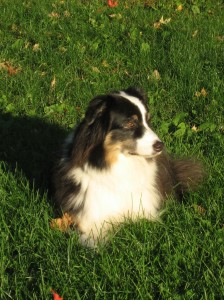 I picked up Kiera late yesterday afternoon and she had a tough night.  She’s doing much better this morning.

The vet thinks the growth was a result of an abscessed tooth, which she removed with a section of the gum just to be safe. It looks like we dodged a  bullet! Exhaling now…

While Kiera is resting comfortably at my feet, I thought I’d use this time to talk about what can cause a canine abscessed tooth, what some of the signs are, and what you can do to prevent your dog from getting one.

In dogs, the signs of an abscessed tooth are:

Kiera had none of those.  What she did have was a tiny red spot on her gums. Because I routinely check her mouth while brushing, this was quickly noticed.  I took her to the vet. Because Kiera’s teeth were in otherwise pristine condition,  our vet thought it was probably just some minor gum irritation/ inflammation. She suggested that I just keep an eye on it.  That was a month ago.

This past week, a blister-like growth appeared a small distance from the red dot.  This time the vet recommended a biopsy to make sure it wasn’t cancer. Oral cancer is the 3rd leading cancer in dogs.

An x-ray revealed the source of the problem. Both roots of one of Kiera’s molars were abscessed.

This is one of the things that kills me about Kiera.  She had to have been in pain, and yet she gave absolutely no indication. None. While Kiera is emotionally a very soft dog — if I look at her cross-eyed, she’s crushed — physically, she’s a very hard dog.  She doesn’t show pain.  I believe if she had a broken leg, I’d only know if it was bent funny.

Anyway, back to talking about abscessed teeth and what to watch out for.

Typically, when a dog is suffering from a broken or fractured tooth, infection forming bacteria can enter any exposed surfaces. If left untreated, the bacteria can cause the tooth to die. As the tooth decays, bacteria can find its way into the jaw through the bottom of the tooth, causing an abscess. If the bacteria continues to advance you’ll see deterioration of the gums and possible travel through to the skin, particularly to just below the eyes. Hopefully, you’ll discover it long before that stage.

Dr. Ira R. Luskin has a very helpful article. Taking the Bite out of Dental Disease talks about the difference between abscesses and tumors.

Hard objects like “Indestructible Bones”, “Hooves”, sticks and rocks can break teeth. Catching a flying saucer-like play toy in mid-air can also lead to teeth breaking. These types of injuries are very painful and usually result in the tooth dying  and may cause an infection or abscess of the bone. Signs of a possible oral problem include difficulty in eating or holding objects, bleeding, or drooling. The bone and overlying  gums will be sensitive to the touch, swollen, and the infection can start a draining abscess ““ a condition called a “gum boil”. Pet owners should frequently check the animal”™s mouth for broken teeth. If any are detected, a veterinarian would immediately extract any of the broken baby teeth.  Poor or no appetite and persistent salivation are often signs of an oral problem. By looking into the dog”™s mouth and checking for any smell, redness, or swelling of the soft tissue, pet owners will often see obvious changes.

Animals eight years and older (less frequently young animals) can develop oral cancer. The third most common site for cancer is the oral cavity. In young animals, problems can involve tumors that affect the teeth directly.

Odontomas are tumors that evolve from the tooth bud and, fortunately, are benign and if properly excised by a specialist will not return. If left in the mouth, they can grow and become locally damaging. Occasional checking of your pet”™s mouth and comparing your pet”™s teeth will help detect this tumor in it”™s early stages and allow for timely removal by a Veterinary dentist. Unfortunately, most oral cancers are malignant which means they will not only grow locally but also can often spread or metastasize to other locations. Early detection offers the possibility of complete recovery.

However, if the tumor has been present for a longer period of time and has aggressively invaded surrounding tissue, the oral surgeon often can only be palliative in his approach. We do not know at present what causes cancer in our pets. Pet owners that are proactive in their approach to their pet”™s oral hygiene often can make early detection and cure of cancer possible.